Enough said….. I have been camping in this natural wonder of the World for the last week, and it have given me Streptococcus, an unknown virus,  and a case of  acute bronchitis. But is still makes it all worth it when you get rewarded with such views after a short hike.

Today is geology day.  I have to admit, this was kind of new to me, but still… Around my hometown there are a lot of famous mountain, and the most famous is Torghatten that have a gigantic hole thru the entire mountain, and is quite the phenomenon in the geology field. You get a sense of the size of this hole in the image below. So today there where an excursion up to the mountain, and a professor gave a lecture about the mountain and how it have been shaped and so on. Very nice hike, and quite interesting lecture.

Me and a couple of friends where out hiking today. And I made this little movie where we negotiated a narrow gorge.

Today it was time to do some of the very famous hiking trails in the mountains of Oahu. And the target of this trip was the Manoa Waterfalls. This is a realy scenic route, and it was quite enjoyable.

Pleace enjoy some picture and short films from the trip.

It is a fairly short trip , about one hour, and we are in America so first a few warnings … just to keep us safe…..

This is the actual valley where some of the old special effect movie Jurassic Park was recorded….

We followed a nice prepared trail up to the waterfalls, it had probably been raining during the day and hence it was a bit muddy along the path.

It was a lot of tourists going up the the mountain, most of them american and japanise . 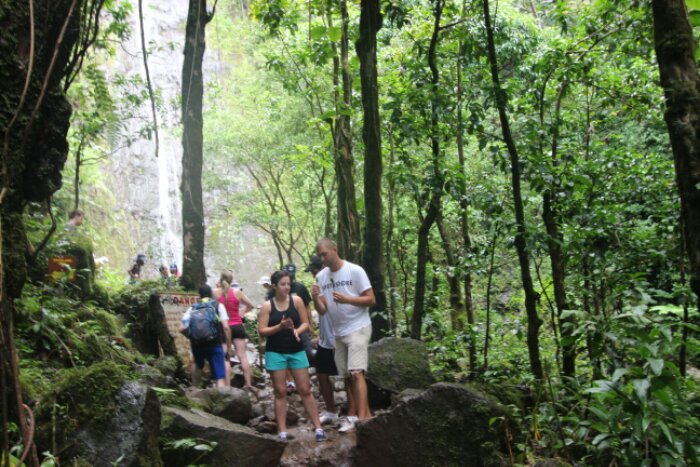 Then we arrived at the top of the mountain. It was quite spectacular.

And last but not least, a short video showing some of the landscape while I was doing the trip down from the waterfall..